The 9th meeting of the Sahel Alliance’s Operational Steering Committee (OSC) took place on 24 June 2022 in Bonn. The meeting focused on the dynamics of ongoing field action in the G5 Sahel countries, as well as on the food-crisis-related issues. The latest developments affecting the Sahel were also discussed at the meeting, which was chaired by Germany and attended by over 60 participants.

Bonn – 24th of June 2022 – Christoph Rauh, Director for Africa at the Federal Ministry for Economic Cooperation and Development (BMZ), began by referring to the growing concerns about the situation in the Sahel “My thoughts are with the people affected by the latest attacks in Burkina Faso, Mali and Niger, in which so many have lost their lives or had to flee from the violence and leave their homes. These attacks remind us that we face cross-border challenges in the Sahel region. I am concerned about the Russian invasion of Ukraine, which has a strong impact on the Sahel. While the war is taking place far from the Sahel, its implications for food security in the region are significant: six West African countries import more than 30% of their wheat from Ukraine and Russia. »

Eric Tiare, G5 Sahel Executive Secretary, also addressed the deteriorating context in the region “This OSC is taking place at a critical time in the life of the G5 Sahel, characterised by the clear deterioration of the security situation in the Central Zone in particular, rendering it almost impossible to implement development projects, and a worrying political context marked by the announcement of Mali’s withdrawal from the organisation. This withdrawal naturally bears consequences for the G5 Sahel’s institutional architecture.”

During his speech, Maman Sidikou, High Representative of the African Union for Mali and the Sahel, stressed that: “We have a governance crisis marked by a backward slide in democracy in some countries and a management of public affairs that is regularly criticised. Insecurity is mounting and terrorism is spreading in the region, with almost daily killings and an unprecedented humanitarian crisis. Regional cooperation and partnerships are under strain in the region, at a time when collective action is more necessary than ever.  »

Focus on the operationalisation of the Alliance in the G5 countries

After a session dedicated to the presentation of the update of the Sahel Coalition’s roadmap by the High Representative of the Sahel Coalition, and to the progress of work on the dialogue and mutual accountability framework, the debates focused on the operationalisation of the Alliance on the field.  According to Christoph Rauh, “The Sahel Alliance serves as a platform to quickly exchange on recent developments and to coordinate common actions and positions in these times of multiple crises. However, as a donor coordination platform, we have moved beyond seeking common positions and harmonising actions: in recent years, the Sahel Alliance has become a framework for the development of new and innovative approaches among partners and donors in the Sahel, such as the integrated territorial approach (ITA). »

In order to better understand the Sahel Alliance’s activities on the ground, experts focused on the implementation of the ITA in the particular context of the crisis in Mali and on the main steps taken, as well as on the key lessons learned from the Bamako workshop.  The analysis of the challenges carried out during the Bamako meeting  was recalled in the session: challenges linked to insecurity; challenges linked to institutional instability and a weak presence of the State; difficulties in terms of financial management, procurement, auditing, etc.; impacts of ECOWAS sanctions. The discussion highlighted several possible solutions for each of the challenges. The field operationalisation sequence was also an opportunity to take stock of the state of progress of the G5 Sahel Facility, a multi-donor facility aimed at rapid financing of development projects in sensitive areas. To date, the Facility, with an initial contribution from Germany of €50 million, will also be financed by France. A first call for proposals has been launched in Mauritania and the preparation of calls in Burkina Faso and Chad is underway.

After a session on the education sector common fund in Niger, the afternoon discussions centred on the food crisis in the G5 countries. How to act on the structural causes and better articulate humanitarian and development interventions?

Christoph Rauh recalled that “Chad has already officially declared a state of food emergency. Overall, the war [in Ukraine] could lead to food insecurity of an additional 10 million people in the Sahel.  This war only exacerbates a crisis in the Sahel that has already seen food insecurity in the region increase at an alarming rate to reach more than 27 million affected people in recent years. It is therefore essential that we tackle this problem adequately and vigorously. Today’s panel discussion can constitute a springboard for us to understand how we can help contain this growing humanitarian disaster. »

Djime Adoum referred to the food crisis as “another challenge for human security. The two main suppliers of grain for the Sahel region are Russia and Ukraine. The Sahelian countries import 55% of their food. 20 million out of 80 million Sahelians depend on international aid and this number is increasing.”

Ollo Sib, Senior Regional Advisor on Research, Evaluation and Monitoring at the World Food Programme (WFP),  diagnosed the impacts of crises in his speech. “In fragile areas, we are witnessing an increase in forced and prolonged displacement and the conditions for sustainable return are not being met. These displacements lead to increased protection risks (sexual violence, recruitment of child soldiers, negative coping mechanisms, etc.). In addition, the ongoing crises are hindering access to social services, with a notable disruption in health systems and the closure of too many schools.  ».

After diagnosing the crises, Ollo Sib spoke about  the nexus approach which, for WFP, implies that humanitarian, development and peace outcomes complement and contribute to each other.

The sequence on food was marked by the intervention of Mr. Aboubacar Djimraou, Technical Advisor to the 3N initiative (Les Nigériens Nourrissent les Nigériens) who shared his in-depth knowledge of the region.  “The Food and Nutrition Security and Sustainable Agricultural Development sector occupies 80% of the population in Niger, in a country that is predominantly rural and where the majority of the poor are found in rural areas and are women.

Persistent, multifaceted complex challenges find their root in a combination of structural, cyclical and emerging causes. 2021/2022 saw an intermingling of unfavourable factors: a poor 2021 campaign, the effects of civil insecurity, covid, more recent impact of the crisis in Ukraine with widespread inflationary pressure. In Niger, the 2021 crop year was marked by a 40% drop in production compared to the five-year average. In addition, there are many aggravating factors… 4.4 million people are identified as vulnerable to food and nutritional insecurity in the  lean season of 2022 in Niger. At the regional level, around 40 million people are affected, which is an unprecedented level. Other structural difficulties are linked to the living conditions in pastoral and agropastoral areas hit hard by the effects of climate change, challenges in accessing basic social services and insufficiently inclusive local governance. These areas thus tend to provide a breeding ground for the development of armed terrorist groups living on crimes and offences of all kinds.  »

Thereafter, Dr Robert Guantoueu Guei, FAO Sub-Regional Coordinator, shared the recommendations of the Agriculture, Rural Development and Food Security Coordination Group. Among the group’s advice for overcoming the crisis, Dr. Guei mentioned supporting the G5 countries in anticipating and preparing for emergencies;  strengthening sectoral reforms that address the structural causes of the food crisis; strengthening the resilience of the populations that are most vulnerable to climate change; and supporting regional solidarity mechanisms such as those put in place by the G5, ECOWAS and CILSS.

Governance of the Alliance: the World Bank will assume the OSC chairmanship

The smooth functioning of the Sahel Alliance Architecture was on the agenda of the last session, notably with respect to the rotation of governance tasks.  The World Bank expressed its willingness to chair the Alliance’s Operational Steering Committee, following Germany. This decision was validated by the members.

Ousmane Diagana, World Bank Vice President for West and Central Africa, said: “The commitment [to the Sahel] is very clear, the challenges are obvious. Together, we can make things possible.  The World Bank is ready to take the lead.” The next steering committee of the Sahel Alliance is expected to take place in the fall. 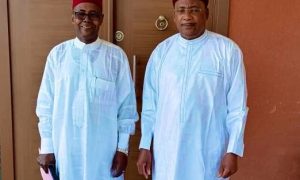 The High Representative of the Coalition for the Sahel, Dr. Djimé Adoum, was received by Mr. Mahamadou Issoufou, former President of Niger, new mediator... 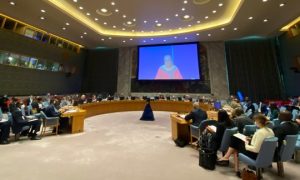